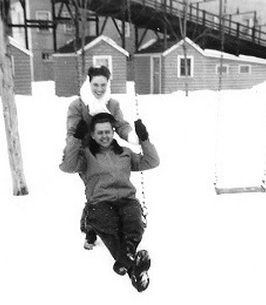 On March 2, 2021 Georgianna Chadwick O’Connor died at age 94 at home which was her heart’s desire. She was the last of her generation to die in the Chadwick family that she was born into and the last to die in the O’Connor family that she married into. Fundamentally, she was a woman of kindness, deep caring, strong faith, and great love. Life’s circumstances also helped her to develop enormous resiliency and a fierce independence.

Georgianna’s innate kindness and caring was nurtured as the eighth-born of 13 children (seven daughters, six sons) of George Washington Chadwick and his wife Elizabeth (McElheny). Growing up in a large family during difficult times resulted in numerous hardships, including the death of Georgianna’s oldest brother. Through these trials, the Chadwicks developed a strong sense of family and a bond of affection that has been passed down through subsequent generations.

Patriotism and service were Chadwick family virtues. Georgianna’s father was a proud member of the New York City Fire Department before going into construction. This began a tradition of policing and fire fighting that has continued over four generations. Georgianna’s five surviving brothers all served in the military--four during World War II and the fifth during the Korean War. During World War II Georgianna’s father, then in his mid- 50’s, contributed to the war effort by building air strips and roads in Alaska. Inspired, in part, by this family tradition of service and helping others. Georgianna would later become a nurse.
Shortly after World War II ended, Georgianna met John O’Connor, a Navy veteran who had witnessed the surrender of Japan from the deck of the USS Missouri. John was the fifth-born of seven children of Timothy J O’Connor and his wife Margaret (Moynihan), two Irish immigrants. Georgianna was 21 when she and John married in February 1948. Their only child, a son was born ten months later in December. They named him Timothy George after his two grandfathers.

Family connections were important to Georgianna and John throughout their married life. Holidays were usually celebrated with a visit first to one side of the family and then to the other with feasting at both locations. Georgianna and John enjoyed being an Aunt and an Uncle to their more than 50 nieces and nephews.

Georgianna and John were a hard-working couple. For most of their life together they held three jobs between them. Georgianna rejoined the workforce even before Tim was of school age, entrusting him during the workweek to the care of her parents. After Tim entered first grade, Georgianna and John ensured that their son never took a lunch box to school, but instead spent his lunchtime and his after school hours with his beloved paternal Aunt Rita and his Kilkenny cousins.

In December 1963 life as Georgianna knew it was suddenly undone. While taking the subway to his night job, John suffered a first and fatal heart attack. At 37 Georgianna found herself a widow and a single parent for her 14 year old son. The response of the Chadwicks and O’Connors to Georgianna’s and Tim’s traumatic loss was exemplary, but the pain of their loss weighed heavily upon them.

In January 1965 after living most of the her 38 years in the Bronx, Georgianna moved with Tim to an apartment building in Downtown Flushing where her beloved sister Anne also lived. Georgianna would remain in that neighborhood for most of her next 56 years.

Slowly but steadily, Georgianna’s life began to open and blossom. She abandoned low-level office work and became a secretary to an executive at Kraft. She overcame her anxiety and got her driver’s license. She joined the Flushing Volunteer Ambulance Corps, met new people, and began to dream of becoming a nurse. After years of attending night school after work in order to obtain high school academic credits that she lacked as a commercial degree student, Georgianna applied to nursing school and was accepted.

At age 44, Georgianna began studying for her Associate Degree in Nursing at Bronx Community College (BCC). She lived in a dorm at BCC with students half her age, while her son was in his final semester at Boston College (BC).

One of Georgianna’s greatest gifts as a parent was to allow her only son to follow his heart. In November 1970 Tim became a Peace Corp volunteer serving 14 time zones away, teaching college English in Seoul, Korea for 27 months.

Meanwhile Georgianna graduated from BCC in 1972. Obtaining her RN, she began working as a nurse at a small local hospital in Flushing. There she met a patient named Howard Caufield, a Catholic widower, father of an only son Steven, a New York City Police Officer, an Army veteran, and a former prisoner of war. They never married but remained devoted friends until Howard’s death in late 1999.

Throughout her life Georgianna was open to all things new--modern furniture design, current fashion and gadgets and technology of all kinds. At age 60, Georgianna took a class on how to build your own computer. Georgianna also pursued a variety of hobbies and crafts , e.g.,making homemade cheesecake, always in search of the perfect recipe, and learning how to make homemade chocolate for special occasions, including creating some 200 chocolate wedding favors for Tim’s marriage to Peggy Rafferty in 1984. As Georgianna’s world grew smaller she began making her own handmade cards for Christmas and other important holidays or occasions. Each card was painstakingly created to capture all of the love she held for this person or family receiving it.

As the years went on, Georgianna’s roles expanded. She became a grandmother when Tim and Peggy adopted their Korean-born daughter Bo Kyung at age six. As her nieces and nephews had children, Georgianna took on the role of grandaunt, and as her grandnieces and grandnephews started families of their own, Georgianna welcomed the role of being a great aunt.

Georgianna was not matriarchal by nature, but as the last of her siblings passed, she came to relish the role and delight in it. At her 90th birthday party in 2016 that was held at Bo’s restaurant in Astoria, over 60 adults and children celebrated with attendees from nearly every decade of Georgianna’s life represented.

During her 80”s and 90’s until her death, Georgianna received excellent health care from a superb cadre of highly intelligent and well-credentialed health care professionals—Dr. Zheng-Bo Huang, Dr. Sherry Li, Dr Fan-Ming Lin, and Dr. Winnie Feng-Gring. Without their competence and compassion Georgianna would never have achieved her wish to die at home.

Georgianna was a prayerful person. In addition to watching the daily televised Mass and the Rosary, she had her not so little list of intentions and people that she prayed for everyday. She was always happy to expand her prayer list to remember the needs of others.

In Georgianna’s last years scoliosis shrank her height to four-and-a-half feet. She weighed in at 75 pounds, fully clothed. Georgianna nonetheless insisted on living on her own. She did so well into her 90’s. During the last nine months of her life Georgianna received extraordinary 24/7 care from a handpicked team of five home caregivers—Audrey Beecham, Hazelyn Lewis, Pinky Capra, Loretta Chin and Tamara Smith. Suddenly losing most of her independence was not always an easy adjustment for Georgianna, but her amazing caregivers always responded with patience, kindness and compassion. Her family remains forever grateful to them all.

Life gave Georgianna the gift of longevity, but with God’s grace she endeavored to make hers a life well-lived, a blessing to all who knew or met her.

Please see the tribute below from Mercy Center, a Bronx charity that Georgianna supported.
This week, Mercy Center lost one of its faithful supporters. After a very full life, Georgianna O’Connor, mother of former Mercy Center board member, Gala co-chair, committee member, and ESOL instructor Tim O’Connor, passed away on Tuesday, March 2, 2021.

At Mercy Center, we celebrated our common Bronx roots. Georgianna was born and raised in the Bronx where she lived for 38 of her years. We came to know and appreciate Georgianna over, remaining grateful for her support of our Gala and Annual Fund, both of which enable us to provide for some of the most vulnerable residents of the Bronx. Georgianna was introduced to Mercy Center by Tim and Peggy and grew in her own appreciation our mission to help women and their families change their lives. Her support helped us offer programs and services that enable families to reach their full potential, addressing the needs of the whole person in a community of respect, hospitality and non-violence.

The services for Georgianna O’Connor include her funeral Mass on Monday, March 15th at 10 am, with friends and family gathering from 9 am, at St. Francis Xavier Church. The mass will be live streamed as well.

In lieu of flowers, the family requests that donations be made to Mercy Center in Memory of Georgianna O'Connor. Your generous contributions will continue the transformation of lives that meant so much to Georgianna.